For Kylie Henn and Cameron Murray of Traditional African Homestays, a love for their part of the world started entirely by accident: when a wrong turn on a warm day in Limpopo led them to cold beers at a neighbourhood tavern, they ended up staying significantly longer than expected. The two can still be found nearby today, in turn welcoming new visitors to the area, and showing off the place that’s become their home. As the two are partners in life as well as in business and got engaged just recently, their only concern at the moment is that the local community is going to create a very large wedding — but who’s complaining? “The main thing was to do something in tourism that changed lives, at grassroots level,” says Henn of her vision from that first day among the baobabs.

She’s quick to say that the village stole the pair’s heart, but neither of them were blindly in love with the place: they were aware of hard work ahead and that there’d be a lot of red tape to slice through before gaining the permission they needed to establish a hospitality provider in the area. After months of what felt like endless administrative challenges, they came into contact with a village elder who provided not only approval, but also much of the sorely-needed guidance that allowed the project to take root successfully. “Working with a community is a fragile thing,” says Murray, pointing out that it wasn’t their place to decide whose homes became the venues for homestays. 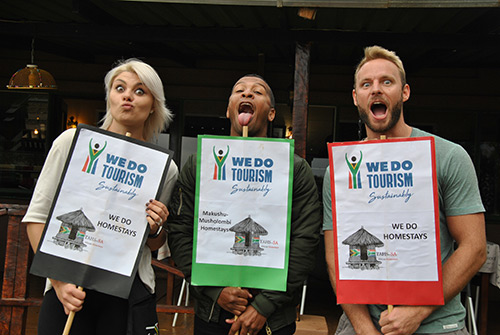 That was up to the village chief, and he chose the poorest of the poor in the community at the time: in other words, those who needed the income the most. In the weeks and months that followed, each of these people rose to the challenge, and among them are exceptional hosts who’ve grown their homes along with their small businesses. For Murray, it’s vitally important that their efforts make the kind of sustainable impact that allows each member of the community to receive value from the project, whether they remain here or venture out to use their knowledge elsewhere. To this end, they’ve established workshops that teach the basics of tourism on a practical, easy-to-implement level: how it works, how it can benefit the community, and the “dos and don’ts” of the hospitality industry.

On the border of the Kruger National Park, they’re in an ideal position to grow the future careers of young men and women in the community, who are learning how to run their own businesses as guides. One of the guides, Aubrey, has demonstrated excellence in so many aspects of the business that he’s been an integral part of growing the project. Now the business’s communication manager, he represents the business externally to spread the word about the homestay experience and its potential for community development. “It was quite a thing, trying to explain this vision, with nothing to refer to. It was something completely different…” explains Henn. With no easy comparison to be made to another project that proved that their idea could work, the pair created a business model that’s as much about relationship-building the human element as it is about their well-structured business planning.

“The power of human connection is underestimated by many,” says Murray. For this reason, they encourage a two- or three-night stay, because the unique value of the homestay experience lies in forming a bond with the hosts. “Your body and your mind only catch up after 48 hours. You might be in a new place and feel a little bit awkward, then by the third night you’re laughing and crying together.” It’s clear that everyone who comes into contact with the community is inspired by the potential for growth and change that’s exemplified here: Eskom is coming on board to establish a youth development centre, and one of the homestay’s former guests is working with the pair to establish a library for the community. “It’s awesome to see the growth,” says Murray of the careers flourishing in the community. “It’s amazing to see the guests leaving there, and there’s almost always a tear shed.”