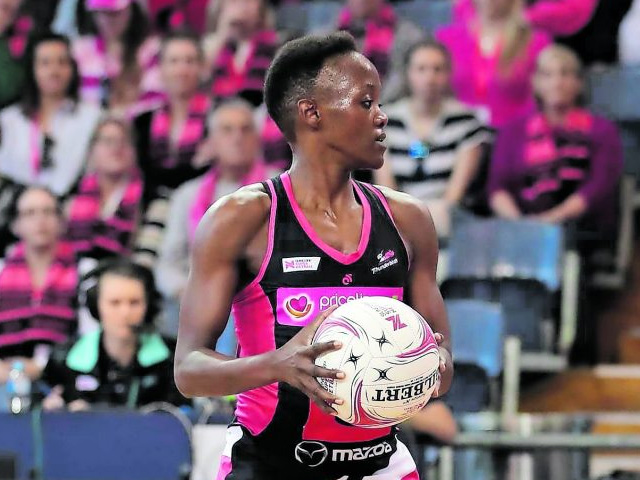 Bongiwe Msomi didn’t have much say when she was elbowed into the netball world. It’s something she’s grateful for to this day. Watching her neighbourhood friend from the sidelines, the then 16-year-old was asked to step into the court so they could have a full practice game. The next Monday, her soon-to-be coach and mentor, Sthembiso Mncwabe, insisted she come to training that day.

“I tried to get away from it,” she says. “I was a bit intimidated with some of the girls as I had less knowledge and skills for the sport. Luckily we didn’t really have much choices back then. If the teachers thought you were good in something, saw the talent in you, they would help you through it and you would just have to respect and trust them. I’m pleased he insisted I play and until today, he’s still my mentor. I have huge respect for him.”

Msomi would thrive on the court but it was just the beginning of her challenges off of it. She was given multiple opportunities in and around her home province of KwaZulu-Natal but struggled to grab them due to steep travelling fees. Shortly after beginning her studies at the Durban University of Technology she took on a job to support both her home and her netball career. “I still wonder how I use to manage. But I did. Though all this, I still kept on training hard and made the teams that I never thought I would. Long story short, you can achieve anything if you put your mind into it. I truly believe that!”

Now the Proteas captain, she has put her ability on display around the world. At club level she has represented two teams in England’s Netball Superleague — the Surrey Storm and Wasps Netball. She’s currently plying her trade in Australia for the Adelaide Thunderbirds. On the international scene, Msomi is targeting a successful season with South Africa as they prepare to make an impact at the 2019 Netball World Championships.

Msomi promises there’s far more to come, during and after her playing career. “It has always been my dream to have a successful netball academy,” she reveals. “I love coaching and being part of the development of netball. It would be great to have a platform where I can educate (mainly about life skills and common issues around being a sportswoman), coach and share my knowledge with the girls while monitoring their progress. I have taken a few steps towards this and hopefully it will happen.” — Luke Feltham