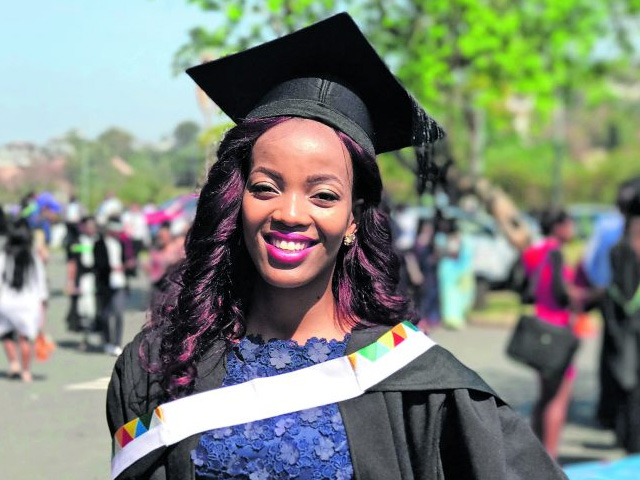 Dr Thandeka Ngcobo is a medical intern doctor at Mafikeng Provincial Hospital, an executive board member at the Godisanang Youth Empowering Foundation and a corporate affairs officer at Ngcobo Empire.

She hails from a small village called Hluthankungu in KwaZulu-Natal. She fought hard to achieve in spite of the difficulties life threw her way. Ngcobo wanted to be a doctor from a young age, but found out she was pregnant while still in her teens. She still managed to complete her matric the same year and achieve results that put her in the top 10 students for the region. She went to university and completed her first year, even though she gave birth that same year. With this level of determination it should come as little surprise that she achieved her qualification and became a vocal advocate for young girls and preventing teenage pregnancy.

“I lost my niece when she was only five; the doctors said there was nothing they could do,” says Ngcobo. “This inspired me to achieve my dream of becoming a doctor. I felt that if I joined the medical field I could make a difference and improve the quality of healthcare, especially in rural areas.”

Coming from a disadvantaged family and rural area meant that Ngcobo had to relocate from her village to a school in a Durban township. When she found out she was pregnant it never crossed her mind to give up.

“I was so disappointed in myself and had no idea how I would face my family, who had sacrificed and invested so much in me,” she says. “Giving up was not an option. As much as my mother was disappointed about the pregnancy, she was more worried about what would happen to my studies at medical school. I remember her asking me whether pregnant students were even allowed to study medicine. She agreed to look after my baby while I went back to carry on with my studies.”

Ngcobo’s mother is her heroine. She could have told her to stay home and raise her daughter, but instead she gave Ngcobo the chance to thrive. And thrive she did. Today she is set to specialise in paediatrics to ensure the children of South Africa are cared for. — Tamsin Oxford