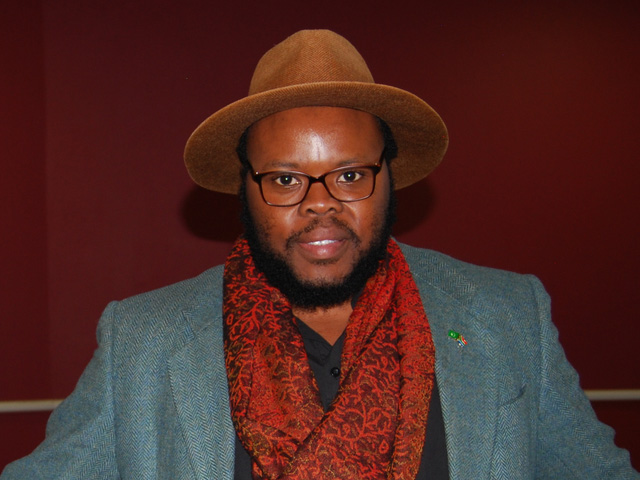 Struggling because one is not allowed to study in one’s mother tongue is an issue faced by thousands of young South Africans every year. Restricted to using only English when he enrolled at Rhodes University, Hleze Kunju felt like an outsider in his own province — bereft of his isiXhosa language, he considered himself without culture and identity.

Kunju is now a lecturer at that very university, teaching creative writing and facilitating choir workshops. He wrote the first isiXhosa PhD thesis at Rhodes University, and received The Most Outstanding PhD Thesis Award by the African Language Association of Southern Africa.

A speaker, lecturer, researcher, author, actor, poet and musician, Kunju is motivated to help others who find themselves with the same linguistic challenges he faced as a first-year university student.

“I must be there to make sure that their journey at university is better than mine,” he says.

With his isiXhosa PhD thesis, he put an end to the myth that African languages are not advanced enough to be used in academia.  “In my experience, creative writing and academic writing work very closely together. The reason why I can use isiXhosa as an academic language is because I read a lot of isiXhosa creative works and have learned various ways of using the language. If school learners are not reading enough creative literature they will struggle to engage and produce academic literature at university level. I encourage and supervise creative writing students. The more academic and creative literature we have, the better for the future of African languages.

“Contrary to popular belief, by writing in African languages, we are able to reach more African people than when we write in English. IsiXhosa is the second-biggest language in South Africa after isiZulu. IsiXhosa is also used in Zimbabwe, Lesotho and Zambia. The only aspect lacking is proper distribution of isiXhosa literature.”

Kunju believes the marginalisation of African languages is one of South Africa’s big challenges. “About 80% of the Eastern Cape’s population are isiXhosa mother tongue speakers, yet this is not reflected in schools, libraries, bookstores or education institutions. Even tombstones of people who never spoke English in their lives are inscribed in English ‘rest in peace’.”

Kunju tells his students: “Start where you are. Use what you have. Do what you can.” He believes it is our responsibility to produce African knowledge in African languages. — Linda Doke