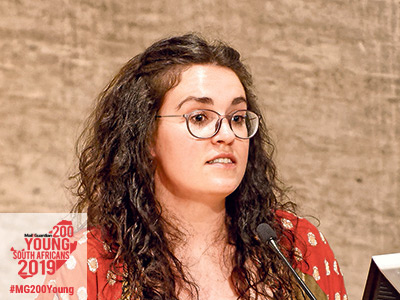 Associate Lecturer, School of Electrical and Information Engineering, University of the Witwatersrand

“
I didn’t think there were enough people talking about the social side or the human consequence of what has popularly been termed the ‘Fourth Industrial Revolution’.

Jessica Breakey (26) is a sociologist working as an associate lecturer in the School of Electrical and Information Engineering at University of the Witwatersrand, where she co-ordinates a multidisciplinary course called Engineers in Society, teaching final-year electrical and information engineers. The course is aimed at connecting social and critical theory to the rapid emergence of new technologies, and challenges students to use a sociological lens to examine the roles of race, gender, power and prejudice in datasets, algorithms and Artificial Intelligence. She believes this work to be necessary because, “the students are designing future-shaping systems and organising processes and structures many of us can’t even imagine just yet”.

Breakey says: “I went into this line of work for exactly that reason — I didn’t think there were enough people talking about the social side or the human consequence of what has popularly been termed the ‘Fourth Industrial Revolution’.” She says that it was particularly tough for someone with her background in the social sciences to delve deeper into design processes and their impact on society. But she has seen a gap for plenty of critique to offer as the Fourth Industrial Revolution grows. “New technologies have had profoundly negative consequences and often propagate systemic injustices, and I want my students to do better, think deeper and use their wonderful and unique skill set to promote justice,” she says.

Although Breakey tries to keep her teaching and research relevant and responsive to what young people in South Africa and the world are thinking about, she says she finds it incredibly hard to be taken seriously by students, colleagues and the institution as a young academic. “I still haven’t worked out how to deal with it all, but being both strong and empathetic are two parts of me I love and want to hold onto as I move in academic spaces.”

Breakey is a Mandela Rhodes Scholar and holds an MA in Sociology from the University of Witwatersrand and an MPhil from University of Cambridge which she completed on the Chevening Scholarship. She also holds another role as a researcher at the Southern Africa Labour and Development Research Unit, working on a Basic Package of Support for young people who are not in education, employment or training. When she is not working you will probably find Jessica walking her dog Milly at Emmarentia Dam.  —Welcome Lishivha 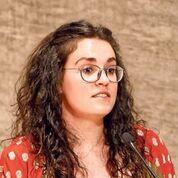