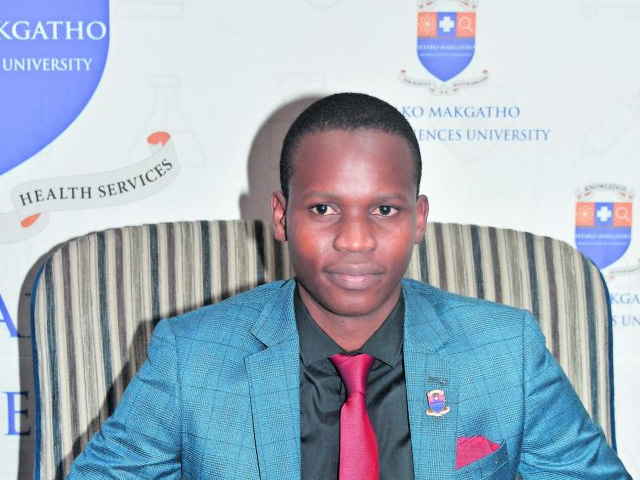 A Kwame Nkrumah quote — “Those who would judge us merely by the heights we have achieved would do well to remember the depths from which we started” — is one Ntwanano Sipho Mapfumari keeps on his mind all the time.

At just 26, Mapfumari has reached some heady heights. Having completed his MSc in Biochemistry looking into the effects of geographical location on the phytochemical composition of the leaves of senna italica collected from four districts across Limpopo, he is now working on his PhD in Pharmaceutical Sciences. Mapfumari is also the co-founder of the educational organization ThinkBig39 and the founder of the entertainment organisation SMU Got Talent and the Progressive African Socialist Students Organisation. In addition to being a part-time lecturer and mentor to postgraduate students, he is also an executive member of the SMU-Medunsa Alumni Association.

It is Mapfumari’s humble roots, the “depths from which he came” which influenced where he is today. “I grew up in the deep rural areas of Limpopo, so I used to spend a lot of time in the mountains, where I was herding goats. It was there that I got to notice that a lot of the indigenous knowledge practitioners used nature to treat their patients. Over time, I got to use a number of nature-based medicines. In 2007, I moved to Phalaborwa to stay with my uncle. There I got to a computer for the first time in 2008.”

In 2009, he was a finalist in the national in the Eskom Science Expo for Young Scientists and participated in a leadership training programme put together by the Phalaborwa-based foundation, Protec. “There I was taught that the best leaders are those who serve their community and leave an everlasting mark on the hearts of the people they serve.”

Serving his community and leaving an indelible mark on the world is precisely what Mapfumari aims to do.

“From time immemorial, plants have been relied on for the treatment of different diseases and infections by different tribes across the continent and the globe as a whole. However, over time, with the advent of new technology, these are neglected and no longer trusted. My career aims to change this by bringing back trust of these natural sources of medication. Who knows, maybe the cure to cancer and HIV and AIDS is hiding there.” — Carl Collison