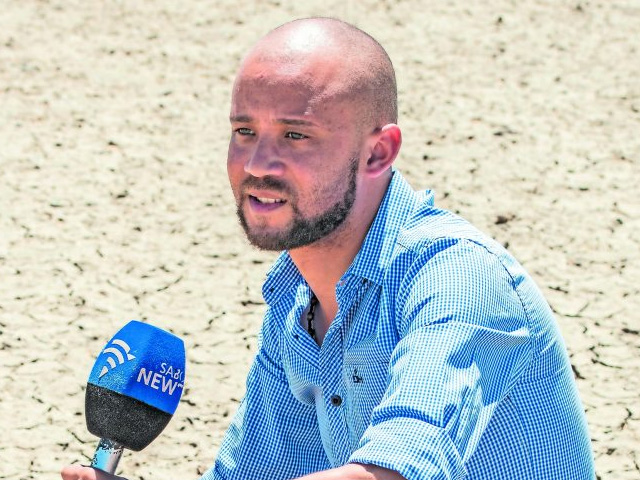 When Reginald Witbooi isn’t examining rivers to report on pollution he might be in the Karoo covering the progress of the world-leading SKA (Square Kilometre Array) radio telescope.

Witbooi is a radio and TV journalist for the SABC, and has won several awards for his reporting. “I was appointed as a radio journalist four years ago, but I’m also doing TV journalism. I don’t compare the two with each other, as long as the story is being told,” he says.

“I write stories because I believe everyone has a voice — but we as journalists need to boost those voices. The stories I love to cover are human interest stories, and it’s in my pen, notebook and technology that I get to call officials to account.”

Last year he won an SAB Environmental Award in the radio category for a pollution story, after Upington residents complained that sewage was flowing into the Orange River. I travelled 400km to cover this piece, to visit the site and get first-hand accounts,” he says. “The residents didn’t lie, and the fact that their local municipality admitted to the problem, but didn’t do anything for quite some time, baffled me. People are consuming water from the river.”

Witbooi comes from a modest background in George in the Western Cape; his mother was a domestic worker and his father was a cleaner at a high school. His parents made ends meet to provide for him and his other five siblings, but he was the only one in his family to go to university. He holds a BA in Communications from the University of the Western Cape, then went on to study journalism at the Cape Peninsula University of Technology.

In his spare time, Witbooi does voluntary work for Caritas, a nongovernmental organisation that helps abused women and children. His desire to help was sparked through his work, when he covered a story in 2016 about a six-year-old who was brutally killed when he tried to protect his mother from a possible rapist.

“I enjoy volunteering because I believe nongovernmental organisations need more hands, and a lot of events are taking place. Also, I am seeing daily how women and children are being abused, and enough is just enough,” he says. — Lesley Stones