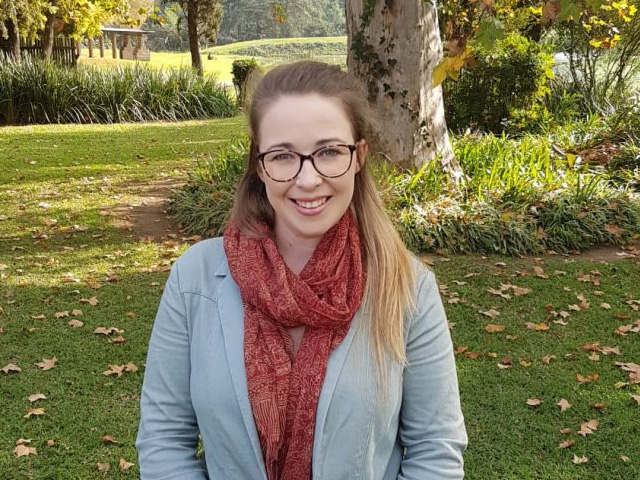 Stephanie Redinger is a postgraduate student studying her master’s in Medical Science in Paediatrics at the University of Witwatersrand. What makes her stand out, however, is that she was the lead author on the publication of a journal article — an outstanding achievement for a master’s student. Passionate about her research and maternal perinatal mental health and child development, Redinger is a force for change in South Africa.

“I began my career as an occupational therapist at a hospital in rural KwaZulu-Natal in 2013,” says Redinger. “I realised it was important for me to work in the helping professions and, as a young white South African, I felt a deep sense of responsibility to commit to a life of service to those less fortunate than I am. I saw mothers and babies in very vulnerable states and began to search for other ways to influence their care in South Africa.”

In 2015, Redinger met Dr Tamsen Rochat, a research director at the Human Sciences Research Council (HSRC) presenting research on interventions for mothers with antenatal depression, and she told Redinger to get in touch if she ever wanted to work in research. In 2016, Redinger did just that.

“By June I had registered for a master’s in Medical Science in Paediatrics, focused on antenatal mental health, with Dr Rochat as my mentor and supervisor. I also applied for and was granted a master’s scholarship from the Centre of Excellence in Human Development,” she says. “In late 2016 I successfully applied for my first grant with Dr Rochat for funding to evaluate participants’ perceptions of the integration of HIV services and the Care for Child Development (CCD) intervention in Malawi. We were awarded the grant.”

In 2017 Redinger published her first author publication using her master’s research results in the Journal of the Developmental Origins of Health and Disease, and was selected to present a paper at the 2017 DOHaD World Congress in Rotterdam. She also successfully applied for a junior researcher role in the Human and Social Science Research Programme at the HSRC. — Tamsin Oxford