Youth Month is upon us and is celebrated under the theme: “25 Years of Democracy; A celebration of youth activism”, which provides government with an opportunity to take stock of strides made in addressing youth issues while also shaping their future.

To honour the youth, the Department of Tourism will continue to raise awareness about projects and programmes that are aimed at empowering the youth, by profiling success stories of those who have benefitted on the electronic platforms.

The profiles will focus on the following initiatives: 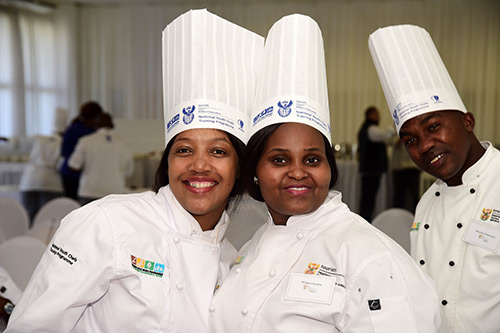 Professional Chefs
Nosiphiwe Mbhele is a professional pastry chef from Umlazi Township in KwaZulu-Natal. She is a beneficiary of the department’s skills opportunities programme that target unemployed youth. Her journey began in 2011 when she saw an advert in one of the provincial newspapers to enrol for a certificate course in food preparation and cooking offered by the tourism department. After passing her certificate programme she studied further and received her Advanced Diploma in Patisserie, which she passed with distinction. She has worked at various establishments overseas, where she perfected her skills in professional cookery; all of her studies were funded by the department through the National Youth Chefs Training Programme. Today she is employed by one of the largest hotels in Durban as a professional chef.

Executive Development Programme
Zivumile Mgugudo is an area manager for a large car rental company. She was part of the women managers in the tourism value chain, who were enrolled on a one-year Executive Development Programme (NQF Level 8) with Unisa. She was part of the first intake in 2016. When she enrolled for the programme, she was a branch manager in the same company; she was later promoted to area manager following the successful completion of the programme. She now manages seven branches. The objective of this programme, which is in its fourth year, is to ensure that the sector has strategic leadership, entrepreneurs and industrialists. When Thuthukile Moloto joined the programme in 2016, she was the room divisions manager for one of the hotel groups. Today she is a general manager in the same company.

National Tourism Careers Expo
Teddy Tokwe’s journey began with the National Tourism Careers Expo, where she was exposed to opportunities in tourism. She is now the owner of Ashwood Guest House, a hidden gem in the heart of Bloemfontein, Free State. It was opened in April 2015, is black owned and female managed. Ashwood is a five-star establishment with conferencing and lodging facilities. It won the MEC’s Award at the Free State Provincial Lilizela Awards in 2016. The establishment also offers experiential learning to hospitality students in schools around Bloemfontein. Her clientele includes guests from Africa, Europe and Asia.

Incubation Programme
Boikhutso Seemela is the owner of and manager of the Ratumuga Camping and Adventure company, based in Rustenburg in North West province. She is a beneficiary of the incubation model, in which the department contracted experienced business development advisors to mentor local businesses. The mentoring process helps create viable tourism businesses that will create sustainable jobs and contribute to economic development in South African communities. Ratumuga Camping and Adventure has created four jobs opportunities in the area — one permanent and three temporary. Refilwe Tladi is the owner and manager of Thalera Tours in Rustenburg. Thalera is an online and tour operator and destination marketing company in Rustenburg. It is black owned and female managed and provides tours to both local and international travellers. It employs six people.

Market Access
Sabu Siyaka owns Ubizo Event and Tours, a tour operating and destination management in KwaZuluNatal. By participating at ITB in Berlin this year he was able to introduce the company to international clients, generate new sales and meet potential partners. He advertised his company through social media marketing and trade publications. The company was able to attract more clients, which will see its sales increase. Market access is intended to broaden and facilitate access for SMMEs in marketing platforms to enhance their earnings and capacity to create jobs. Qualifying SMMEs are provided with an opportunity to participate in marketing platforms both internationally and locally through a subsidised cost programme. Valentino Meirotti is the owner of Famba Famba, a tour design specialist company. Participation in ITB 2019 helped Meirotti gain market insight on how deals and sales are done at intentional level, as well as to gain the trust of agents and the market.