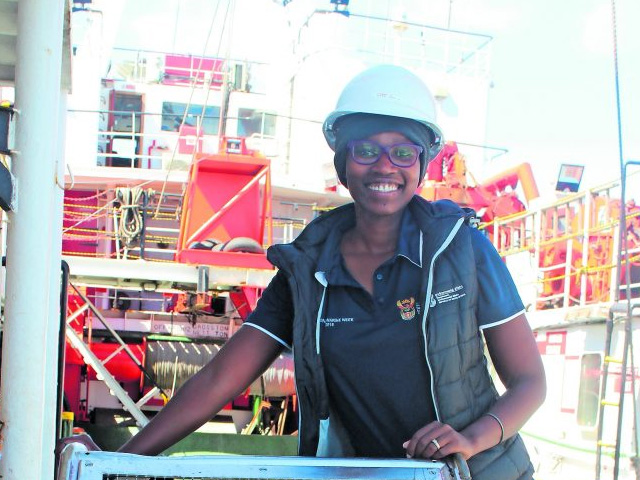 As a black girl from the rural, landlocked town of Kokstad in KwaZulu-Natal, marine biology was not a career path Zoleka Filander thought she would follow. But she was always interested in science. This love of science led Filander to marine biology and in her work as a benthic ecologist, she plays an integral role in ensuring the conservation and management of ocean resources.

Filander believes marine conservation is crucial. “The ecological health of the environment is of paramount importance to our existence and survival. We owe it to ourselves and future generations to take care of the environment that provides us with so many services,” she says.

While completing an honours degree in Marine Biology at Walter Sisulu University, Filander became particularly passionate about marine resource management. She interacted with a rural coastal community, whose dependence on marine resources and misunderstanding of marine protected areas was something she understood as she came from a similar background. She realised that marine resource management could resolve complex societal issues through a science-policy interface. Filander wanted to use science to advise policymakers and be the voice for communities to help them better understand the importance of marine protected areas and marine spatial planning.
Filander is also working on her PhD in marine spatial planning, with research centred around classifying deep-water coral taxonomy to show how fundamental science can be translated into marine spatial planning. She hopes that her research will help her be the voice of rural coastal communities at a national level.

As a black woman in a field dominated by white people and men, Filander’s career trajectory has not been smooth. As the only black female diver in her research unit and one of three black female scientists at the department of environmental affairs who have led a scientific expedition, Filander is a pioneer in her field. With half the opportunity, she has had to work 10 times as hard. But she says it’s all worth it.

“I hope I am cutting a path through for those black females who follow me, so that hopefully they don’t have to face the same obstacles I did.” — Shaazia Ebrahim